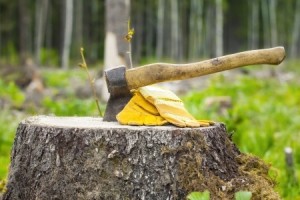 Tree stump removal equipment has come a long way. Back in the 1800s, trees were chopped down by hand using double-bit and grub axes. Pioneers sweated their way westward, chopping down trees from Ohio to California as America grew and new areas were settled.

In the old days, trees were generally cut in the winter when farm work wasn’t so pressing. By springtime, grubbing the stumps would take place after the frost was out of the ground. Grubbing involved men using small grub axes to dig around stumps and cut off small roots. Double-bit axes would be used to break rocky soils, chop out roots, and break any rocks in the way. At the time, you couldn’t go to Wal-Mart to buy tools; instead you visited the local blacksmith who made tools by hand.

Grubbing stumps was hard, sweaty work– especially oaks with their stubborn roots. Eventually, stump pullers came into play, whereas a roller and cable system and a horse were employed to remove stumps. Literal horsepower enabled many stumps to be pulled out of the ground in the late 1800s. As an alternative, dynamite was sometimes used to help blow stumps up! As you’d imagine, though, that got dangerous.

Today, tree stump removal involves stump choppers, grinders and chemicals which do not require the use of horses, and definitely do not break the backs of men. In other words, technology advancements have made stump removal a lot easier and safer for all involved.