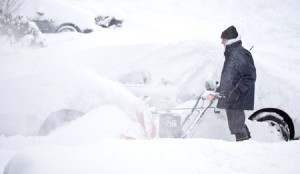 Did you ever think you would see a day where a snowstorm brought things to a halt in New York City, aka the city that never sleeps?

Of course, New York City is not the only area that the Blizzard of 2015 has impacted. In fact, our area has also been hit hard by the snow, which can cause a litany of problems, especially when it’s coupled with wind.

Let’s look at a few suggestions that will help you endure the miserable Blizzard of 2015.

There is always the possibility that heavy snow and wind can cause limbs and branches on your property to pre-maturely fall. If that happens to you, be sure to contact Big Foot Tree Service. We provide 24-hour emergency storm cleanup and will get your property back looking as it should in no time.