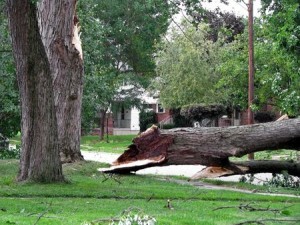 We always see those commercials on television, or comedic skits in movies where a branch will fall from a tree and usually land on someone’s car beneath it. We just assume that the branch broke on its own with no rhyme or reason behind it, but there are actually two things that cause tree branches to break and fall like that.

Sure, people always associate these types of accidents to high winds or cold weather days before the branch actually fell, but what really causes the branches to break and fall are something called weak branch unions, as well as branches becoming epicormic. First, a branch union is formed between the branch and the rest of the tree, and these are what hold the branches up. The branch bark ridges being upturned at the branch junctions, meaning that where the stem of the tree and branch meet is a sound, strong connection, can characterize a strong branch union. A weak branch union is just the opposite, and occurs when a branch and tree stem grow too closely together that bark grows between them. This forms the weak union, causing the branch to fail over time.

Epicormic branches are formed usually as a response to injury or stress to the tree. These are essentially new branches that have formed to replace the injured. These branches form such weak unions because they are so shallowly attached to the center of the tree, whereas the original branches were firmly cemented in the stem. Needless to say, start parking your vehicles in the garage or as far from underneath your trees as possible.

If you’re worried about any trees on your property, please contact Big Foot Tree Service today.