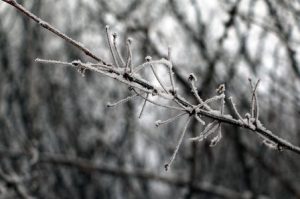 The answer is simple: plants evolve to survive winter by going dormant. So, that’s why trees, for example, drop their leaves in October and November. They’re slowing and then stopping their growth while also reducing the amount of water in their own branch and root tissues. Interestingly, trees regulate themselves to the point where the lowered concentration of water in their tissues acts like a natural antifreeze. Therefore, they make themselves more immune to icing over.

Sometimes the weather gets so cold for so long that water does turn to ice within the shrub or tree. Ice crystals form and can cause damage. Now even if the water in the soil around the roots freezes solid, the plant will be okay. It’s when the water inside the roots’ tissues freezes that there’s a problem.

Typically, the aboveground parts of greenery are less likely to be damaged by extreme cold than the roots. Thankfully, though, soil acts as nature’s warmer, so it doesn’t get as cold as the air above it– usually.

If there’s a seemingly never-ending cold spell, though, soil can “get cold.” 30 degree weather isn’t so bad, but if there are several days in a row where the temperature’s around 0 degrees, then roots may suffer damage. Furthermore, damage can occur when there’s a sudden deep freeze. Plants like things to change gradually– they don’t do well with sudden, extreme changes.

Putting mulch around your New York or New Jersey shrubs and trees is a good idea because it helps insulate the soil, keeping it warmer during the winter. In addition, if it snows? Well, snow acts as a good insulator, too, so there’s one good reason for it to snow.

Should you have any questions about shrubs or trees that don’t seem to be surviving the winter weather well, you can call New Jersey’s Big Foot Tree Service at 973-885-8000.